Some more bad news for Facebook. The following two news bites explain why. At a deeper level, we must ask why Facebook users are disengaging. I suspect it’s due to two factors: one, FB’s expressed desire to please users by emphasizing friends and family in timeline feeds; and two, because most of FB’s timeline content outside of friends and family is fairly tedious and distracting. Both factors greatly reduce the ad pushing revenue model that FB depends on. One could feel this at least a year or more ago when ads grew like kudzu on our timeline feeds.

The solution is to de-emphasize the monetization of meaningless connections and focus on meaningful connections.  That can only come through peer-to-peer sharing of meaningful content. Stories is one way to engage our creativity. Many others exist. See tuka.

Facebook had a terrible, horrible, no good, very bad day.

After the company’s quarterly earnings call with investors, FB’s stock price dropped ~20% in after-hours trading. Over $100B in value disappeared in an instant after FB announced disappointing revenue numbers and user growth.

Some context: that’s comparable to the entirety of General Motors, Ford and Target… combined.

Why did the stock tank? A perfect storm hit one of Facebook’s core features, the News Feed:

But the most interesting change to the News Feed: the rollout of stories, a well-received but not-well-monetized feature that could change how most people use Facebook and their products altogether.

Stories – tappable, full-screen photos and videos – are replacing news feeds everywhere. The format was originally pioneered by Snapchat. In fact, right after Snapchat launched stories in 2013, Facebook tried to acquire them for $3B. 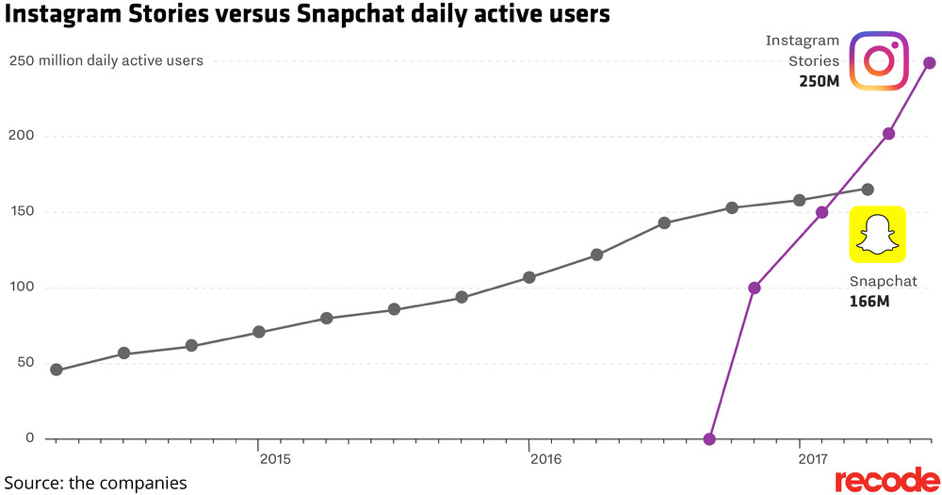 Instagram stories took off, with 250M+ users engaging with the feature less than a year after its launch. That’s over 50% of Instagram users… and close to double the number of Snapchat daily active users.

Unfortunately, the success of Stories might shoot Facebook’s ad revenues in the foot. Companies are still figuring out how to build the ad units – engaging, vertical video ads that users won’t immediately tap past. Rest assured that #content creators everywhere are working to make Story ads profitable. [Blogger note: interesting that people still think content is only worth what it can shake from the money tree (i.e., commercial advertising).]

The Lords of Easy Money